How to plan a team retreat

So about this extensive country list in the Serverless.com footer:

Yeah. We decided early on to embrace having a largely remote team. The reason was pragmatic: as a small company, we’d get access to bright minds while avoiding the intense competition (and requisite salaries) for talent in the Bay Area.

At this point, half our team works from another corner of the world. It’s been a fantastic challenge. Ever tried to find a good time to schedule all-hands meetings when your team spans 18 time zones?

The most important thing we learned is that, in smaller companies, decisions get made at the lunch table. Our remote team members were missing out on daily small talk that turned out to be critical. Asynchronous comms over Slack and Github weren’t quite enough.

So we did what seemed like the most reasonable thing: we brought everyone, the entire remote & local team members, together for a retreat. And how’d it go?

It was so successful that we now do them twice a year. Our team chemistry got way better, and we’ve been able to collect tons of candid feedback about company culture and process that we wouldn’t have gotten otherwise.

If you have a largely remote team, frankly we really recommend it.

But before you do, we've learned some important lessons about getting the best return on investment. So read on and learn from our mistakes.

Our goals inform our work sessions, team outings and even downtime. Setting them in advance means we can send out the agenda early enough for team members to prepare for each session.

If you’re used to OKRs, then you’re probably familiar with how to set a high-level Objective and achieve it with Key Results stepping stones, but here are some concrete examples from our past retreats:

At the end of 2016, some changes in leadership had left several distributed team members feeling out of the loop. Objective: get everybody re-aligned. Key Results: define our team values together, and do team building activities to establish trust and comaraderie.

It really helped, and we started making swifter progress toward some aggressive product goals. But that swiftness exposed some serious issues with our product process. That became the goal of our next retreat: improve the way we do product. There were several days of intense conversations, but at the end of the week we had solved a lot of pain points and implemented a framework loosely based on human-centered design.

Of course, we wouldn't know how successful our team retreats are without analyzing some data. (#DataNerds) We use Officevibe to track happiness and engagement on a weekly basis.

Our team trend includes a big spike in satisfaction right after a team retreat, followed by a slow taper-off: 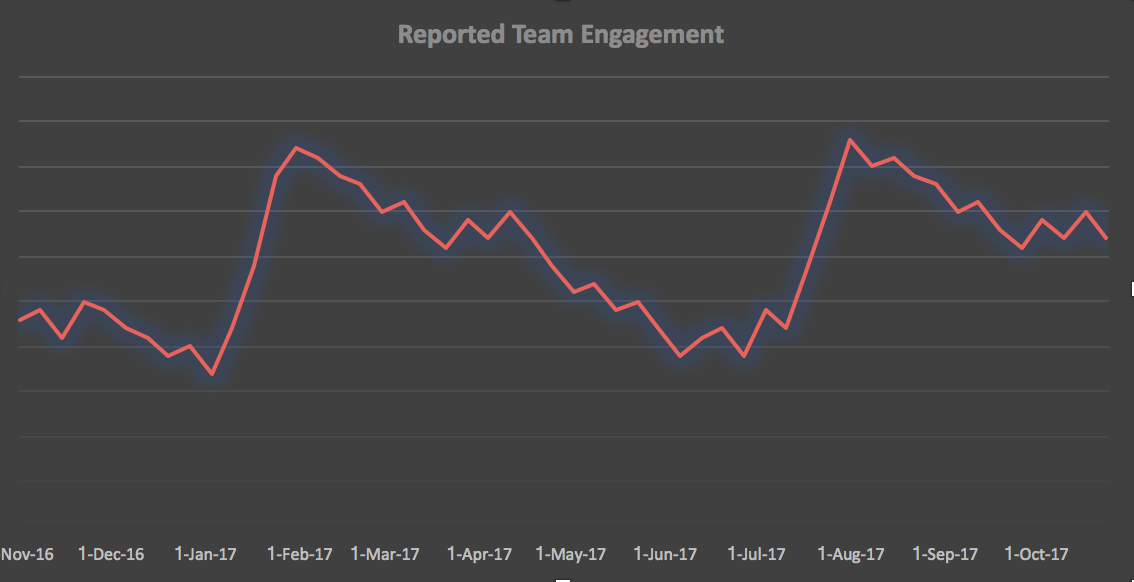 It makes sense—face-to-face interaction is good for team morale, but eventually you need a re-up. We've found that the six month cadence is good timing to keep the team at a positive level of engagement.

We measure the success of our team retreats themselves via ‘before & after’ surveys. We always see a big jump in team members feeling aligned right after a retreat. The change was palpable in post-retreat team meetings: people tended to be more positive, and focus on how to make a solution work versus talk about why an idea couldn't work.

It isn’t enough to simply look at the data, though. We use these feedback loops to constantly improve our process. We always ask, What did you love? What could have been better? What should we do next time? on each of our surveys. It’s already given us a huge actionable insight: at our next retreat, we’re going to try bringing on a facilitator to keep us efficient and focused.

All work and no play makes serverless a lustless team. It’d be a bit cruel to have everyone travel halfway around the world just to sit in a conference room all day.

That's why we try to find cool retreat locations with easy to access recreation. Plus, it’s even better bonding material when you can all experience something new together. One of our best moments, actually, was hiking Hendy Woods after a huge rainstorm—navigating the flooded redwood trail and hanging with swimming salamanders.

Evenings usually include board games, jam sessions or several rounds of Mafia. ...because nothing says ‘go team!’ quite like calling each other liars and pretending to kill each other one by one.

Those moments of communal downtime are just as important as any work sessions we organize. They remind us of how much we like each other as people, and help build a strong foundation of trust and respect. Sometimes it's easy to forget that the person on the other end of the Slack channel is a human being with a family, hobbies and obligations; at their best, retreats lower barriers and foster friendships.

These are just a few ways that we make sure we are getting the maximum return on our team retreats. If you want the full story, our Retreat Planning Guide is publicly available inside the Serverless Company Handbook. Feel free to peruse.

We hope it works as well for you as it has for us! Any questions, drop us a comment below.